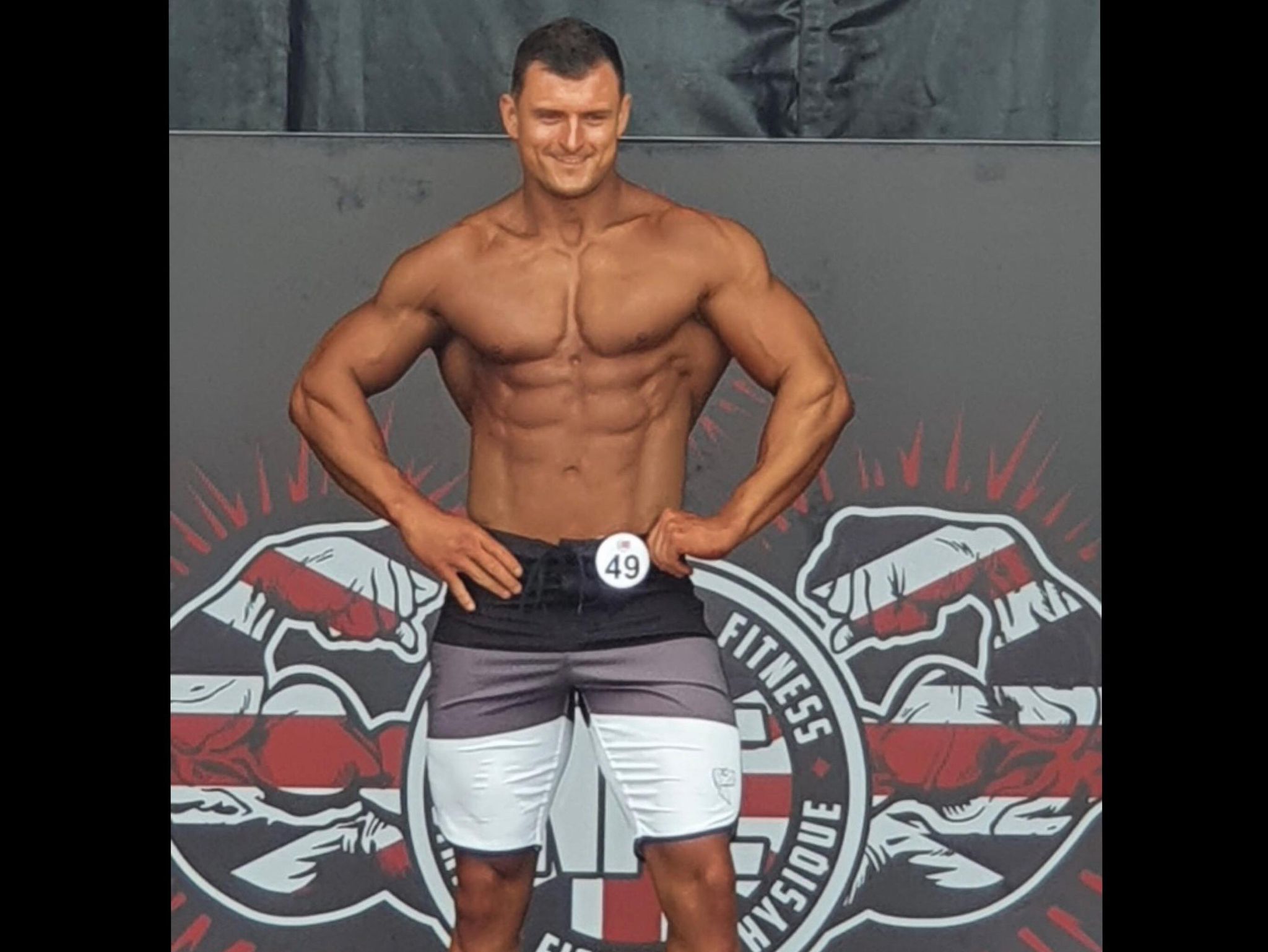 Dorset Spotlight had the pleasure of chatting to Danny Parker, 29, about his bodybuilding journey and how he went on to win the Men’s Physique Beginners category this weekend in Bournemouth.

DS: Hi Danny, thanks for taking the time to speak with Dorset Spotlight. Congratulations on your success at the 2 Bro’s Pro Bodybuilding Competition at Contender Fest this Saturday. Tell us about your sporting background and how you got into competing at Men’s Physique competitions?

Danny: “I have always been into various sports, but the gym has always been my favourite. When the last lockdown happened, it was the longest I had not trained for, going almost five months without lifting a single weight – it was my worst condition to date. I was ashamed of how bad I had let things get. Things needed to change, so I decided to build a summer house for a gym. I decided to raise the bar and set the goal to compete for the second time at one of the best federations out there. The Primitive Performance coaching team kept me on track throughout the process and helped guide me to my first competitive win in Men’s Physique.”

DS: What type of training did you do in the lead up to this competition, and did you follow a tailored diet plan to get you into shape?

Danny: “I have always used Primitive Performance, so after various lockdowns, we changed everything to a new diet and training programme.

So much changed in my diet from start to finish. In the beginning, I checked in with the team weekly, and as it progressed and neared the end, I checked in daily to make the correct adjustments. Without those changes, it would not have been possible, so full credit to the team.”

DS: It takes a tremendous amount of hard work and dedication to achieve a competition-ready physique. How did you manage to juggle family life, work, and training? Danny is the owner of the busy Library Road Garage in Parkstone.

Danny: “I am a very ambitious person, so when I set my goals, no matter what they are, I always see them through. I had to change my workouts and training around my work and home life. Fortunately, having my new home gym allowed me to work late if needed and still train at home after work. Anyone will tell you that consistency is the key. I made sure I did not miss any workouts. My training was weights five days a week and cardio the full seven days. Towards the end, my day consisted of waking up early, fasted cardio, low carbs most of the time, a full day of work, then training and more cardio after. It was hard, especially with an active job and constantly on the go – but the outcome was worth it.”

DS: Did you face any challenges on your way to achieving your success? If so, how did you overcome these?

Danny: “We have an 18-month-old daughter, which made things difficult sleep-wise. Everyone knows there is nothing worse than teething babies, so there were quite a few sleepless nights along the way. I would try to nap before workouts, if possible, get early nights, and catch up on sleep at weekends. The help from my fiancé made this possible as she knew how much it meant to me and how far I had come.

The worst I felt was six days out from show day. I was doing a core workout in my gym at home, and I felt a sudden pain in my abdomen area. I had a hernia operation just over two years ago after my last competition, and the mesh had torn from the muscle due to strain and low body fat. I felt distraught after all the hard work I had put in and even considered pulling out, as going through my routine for the show was incredibly painful with the pressure on my abs. We decided to lower the training as we were days away and take things a little easier but pushing the carbs back in before the day made things worse. I was worried about the routine on stage but did my best. Although it was not visible, the pain when tensing was horrendous – but it was enough to get me the win.”

DS: Tell us about the competition and how you went on to win two medals on the day?

Danny: “As this was my first Men’s Physique competition, I decided to enter two categories – the Men’s Physique Beginners class, as it was only my second time on stage. I then entered the 5’9 to 5’11 height – open class, where you find many athletes who have a great experience in competing. The line-up for this class was incredible. All the competitors had worked so hard, and all looked amazing. There were a few well-known names in the line-up, so I did not hope for much, but surprisingly, I placed 3rd. Placing 1st to 3rd, you receive an invite to the Arnold’s – the biggest competition in the UK for the fitness industry. But with deep regret, I have decided to stop everything until I have my hernia sorted again.”

Jack and Alex Forster are Racing Across America