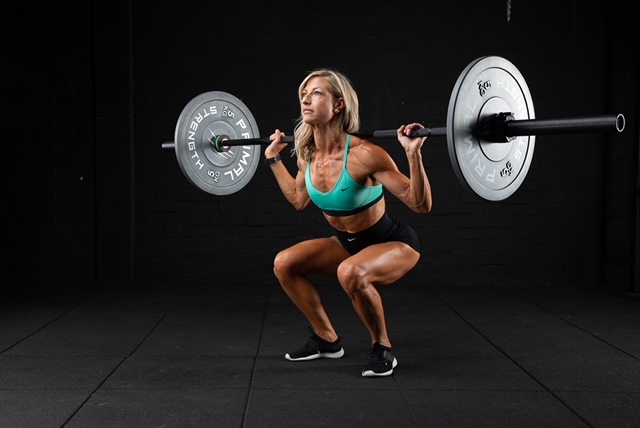 After relocating from London to Poole, Emma – age 30, and her husband Mark were busy renovating houses and enjoying family life with their two girls, aged two years and eight weeks.

Five years later and three houses on, they had expanded their family and had three young girls aged two, five and seven. The children were getting older, and Emma was in a place where she was looking at what she would do next with her life. Emma recalled: “I remember being at the gym and looking at a Women’s Health magazine. As I was flicking through the pages, an article about Body Building and Bikini Competitions grabbed my attention. I knew I was a long way off how these ladies looked but wondered if this was something I could do in the future!”

On the 30th of October 2014, Emma’s 35th birthday, she discovered a smooth round lump on her breast. She had lost her mum to cancer, but there were no other cases in the family, so she never thought it would happen to her. She was stunned.

After a referral from her GP, Emma went to Poole Hospital for a mammogram. Two weeks later, Emma returned to Poole Hospital with her husband Mark and received the devastating news that she had breast cancer. “The team at the hospital took great care of us, I knew I was in safe hands, but that didn’t stop the feeling of numbness that took over my body at that moment. It was a strange feeling; I was not sure what was going on around me. At night, I could not get away from the feeling of needing air. I would open all the windows to feel that I could breathe!”

If your cancer has any of these receptors, the doctors can use treatments like hormone therapy or other drugs to help destroy the cancer cells. But if you have triple-negative breast cancer and you do not have the receptors, the only treatment going forward is chemotherapy, which is still an effective option.

“I received my diagnosis on 20th November 2014, and from January to April 2015, I had six rounds of chemotherapy, followed by 20 rounds of radiotherapy that finished in July. I lost my hair, and on the second round of chemotherapy, I was admitted to hospital for a week as I had Neutropenic Sepsis.”

Neutropenic sepsis is a life-threatening complication of anticancer treatment, the term is used to describe a significant inflammatory response to presumed bacterial infection in a person with or without fever.

“I am lucky to have a supportive family around me, but I could not help feeling guilty about my diagnosis. Our family has suffered so much loss from cancer. Both of Mark’s parents had passed away. His mother was age 42 when he lost her to bowel cancer. It was hard on my dad, he lost his wife to breast cancer, and now he had to experience his daughter go through a similar situation. Cancer is like a bomb that goes off in your house – it splinters out for years, affecting not only the body and mind of the person going through the trauma but also affecting the people close to them. My family, including my girls, are extremely resilient. I’m proud of them.”

After treatment had ended, Emma realised that her newfound love of carbs meant she had gained weight. She knew the physical and mental aspects of breast cancer had finally taken a toll – she had lost herself. Emma was ready to get her life back, and losing weight and feeling fit, was part of her healing process.  Thinking about the bodybuilding article, Emma knew this was what she wanted to do so, in 2017, she signed up to Primitive Performance and started weight training with her coach, Scott Exley. Her understanding of weight training and diet evolved, and in 2020, she knew she was ready to get that bikini body.

“I weight train five times a week and follow a strict diet during the weekdays and take a more relaxed approach at the weekend. The training was going well, and Scott suggested that I book in for a photoshoot with top UK fitness photographer Matt Marsh. My confidence was growing, and I knew my body was looking better. I trained hard in the lead up to the photoshoot and felt physically at my best. It was an empowering moment as the camera clicked away. I had left my old body behind and was looking at the new me. I felt good, so I signed up to take a personal training course. I love training so much and want to help other women to be the best version of themselves, inside and out.”

However, this was short-lived. Soon after the photoshoot, Emma went back into hospital for a planned operation to remove her ovaries. She then realised she had worked so hard at the physical aspect, but mentally work needed to be done. “I booked in with a psychotherapist in October 2020 and had EMDR therapy, which I completed in April 2021. I’m so pleased I did it as I finally feel free from the trauma linked to my breast cancer.”

Eye Movement Desensitization and Reprocessing (EMDR) therapy is an interactive psychotherapy technique that is used to relieve psychological stress. It is a treatment for trauma and post-traumatic stress disorder (PTSD).

“I knew that I needed to help myself before I would be in a position to help others. I have nearly finished my personal training course and in October I will be taking part in my first bikini competition. I know that whatever happens on stage, this is the final piece of the puzzle before I can leave all the negativity in the past and focus on my future!”

Please refer to the NHS website if more information is needed.