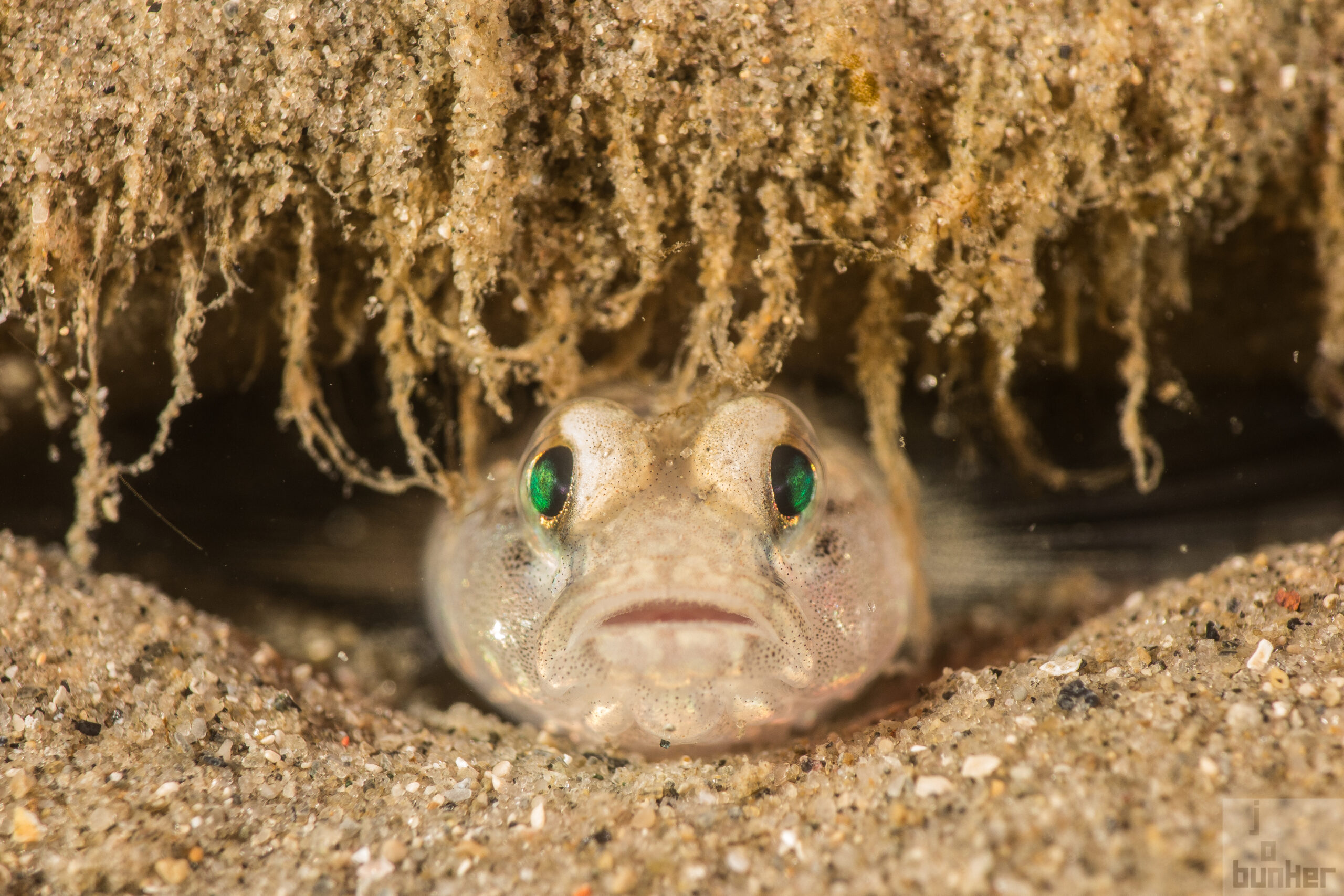 Secondary school teacher, Jon, 38, has always loved the natural world – especially the sea. He is an accomplished diver who regularly dives around his local area of Bridport and Portland, capturing sea life in his stunning underwater photographs and sharing on his blog – Jon Underwater.

Dorset Spotlight had the pleasure of talking to Jon about his life; and his journey to becoming one of Dorset’s most popular bloggers for diving and underwater photography.

DS: Hi Jon! Tell us how your love for the sea began and how you got into diving?

Jon: “I have been fascinated with the sea and its creatures for as long as I can remember, the more obsessive aspects perhaps showing when I continued rock pooling beyond my teen years. As a child, my go-to VHS to watch when I was poorly was BBC’s ‘Sea Trek’ – featuring Martha Holmes and Mike deGruy (Who I also must thank for the equally formative The Blue Planet (2001) alongside Alastair Fothergill). I finally got round to a PADI Open Water whilst backpacking in Australia in 2004. The following year I completed the AOW and dry suit qualifications, which was the start of my involvement with British diving and conservation. To date, I’m up to just over five hundred dives; in a mixture of conditions, including a smattering abroad, but UK diving is where my heart is.”

DS: Have you had any tricky moments or encounters under the sea?

Jon: “Sadly yes. I have always been happy to share the most notable (potentially fatal) event with my fellow divers. Not to brag you understand, but rather to emphasise the dangers of complacency.

Back in July of 2010, I had only just moved down to the area, and I was full of enthusiasm to dive all the legendary wrecks of Lyme Bay. I booked onto a local charter to dive the M2, the unique aircraft carrying submarine which sank in tragic circumstances in January of 1932. The M2 already had two boat’s worth of divers down, so we ended up diving the wreck of the equally historic HMS Sidon.

I had no buddy, but I paired myself up with a lovely but unknown gentleman on the boat, which was naïve of me, as we ended up losing each other in the turbid water. To make matters worse, relatively green as I was to dry suit diving, I had been using my dry suit as my primary source of buoyancy compensation. It had inflated far too much at depth to alleviate the crushing squeeze from my membrane dry suit. I could not clear the air from my suit fast enough to slow my ascent sufficiently, and whilst not popping up like a cork from thirty-odd metres, I wasn’t anywhere near slow enough, leading to a computer lockout as I had most likely clocked up a bend.

My first thoughts on being picked up on the boat lift were of shame and embarrassment- I was not prepared for this to happen to me despite the entirely predictable set of decisions that had led me to this point. I had half a mind to keep it to myself, but I was also troubled by my separation from my buddy, and I had to alert the skipper. Going into the wheelhouse, I found a near-identical set of circumstances had happened to my buddy, as I saw him hunched over a bottle of O2. It was no good. I fessed up and promptly joined him on the O2 as a precaution whilst our skipper radioed in the Portland Coastguard helicopter. We were in Poole DDRC less than 40 mins later and got assessed for having gas on my spine. I felt fine going into the chamber, but walking out eleven hours later, I felt incredibly rough. I had lost all feeling in my fingertips. The regime of 15-minute bouts of oxygen was exhausting as we were slowly ‘brought back up’ from depth. It was a week before I regained feeling again.

The lessons from all this are painfully obvious: build-up to deeper, more challenging dives, only attempt such dives with someone you have dived with previously (a standard buddy-check and a vague plan isn’t sufficient in my opinion, you need to be thoroughly acquainted with each other’s kit and underwater habits). Finally, your training must be adequate for what you are attempting to undertake, your confidence in that training and that equipment absolute.

I finally returned to dry suit diving several years later. Most of the subjects I’m after are in shallower water, and I tend to find wetsuit diving more comfortable anyway. That said, I do make sure I do at least a couple of 30m+ dives each summer, as it forces me to keep my skills up to date, particularly decompression diving DSMB deployment.”

DS: Your underwater photos are superb. Is there a particular camera you use to take these shots?

Jon: “Thanks! I try to tweak and improve things where I can, though I’m quite a slow learner. For many years I shot with a simple compact with an onboard flash, but these last two years, I have started experimenting with some small external strobes to let me freeze the action that much more. The change came in 2018 when I started using a compact camera with a larger 1” sensor, my Sony rx100, which doesn’t sound like much but makes all the difference when shooting macro subjects. I still shoot with my rx100 for most of my small photography subjects. As I have progressed, I experiment with wider shots and natural light where possible, using my slightly larger mirrorless Sony A6000.

Perhaps the most valuable addition to the underwater photographer is a patient buddy, and I’m lucky to dive with fellow photographer Georgie Bull. We shoot similar gear and environments and help encourage and support each other with our photography, alongside friends in the community.”

DS: Tell us about the type of marine life you can photograph in the Dorset area?

Jon: “There is more marine life than most people would imagine. It is a point my fellow underwater photographers and I try to communicate. We have a truly exquisite range of brightly coloured sea slugs throughout the spring and summer. Our seagrass beds host a diverse range of young flatfish, pipefish, tubeworms, molluscs, and long and short-snouted seahorses. You can expect to see the feisty velvet swimming crab, European lobster, and brown crab on most dives, including the occasional cuttlefish or crawfish (spiny lobster)- the latter making a gradual comeback after a lengthy absence due to overfishing. The spectacularly decorated undulate ray can grow quite large and is scarce elsewhere – we have a resident Dorset population that marine biologists Matt Doggett and Sheila and Martin Openshaw keep close tabs on through The Undulate Ray Project. Matt was also involved in documenting the first occurrence of a colourful favourite of mine, the Snakelocks anemone shrimp, back in 2007, which has since spread east and west across Dorset and into Cornwall, Devon, and Hampshire. Other distinctive and charismatic fish include our lumpsuckers, angler, and triggerfish. If you are lucky, you might catch a glimpse of an octopus – we have both the smaller ‘curled’ and the large, but less common to see ‘common’ octopus (the English Channel supposedly being the northernmost extent of their massive range). We also have a surprising variety of sharks off the coast; we expect more as our waters continue to warm.”

DS: Can you describe your best diving moment, which led to you capturing your favourite underwater photo?

Jon: “That is a tricky one. I got into underwater photography as a way of documenting my encounters. In that sense, almost every dive is unique and special in some way. There are some stand-out encounters, the one that springs most obviously to mind was the day I finally saw my first UK octopus.

My friend, and an occasional dive buddy, Colin Garett, had seen an octopus off Chesil beach in 2016. But despite rigorous searching on my part, I continually and frustratingly came up short. After four fruitless years of searching – it had become such an obsession for me, much to the annoyance of my indulgent wife (on more than one occasion, I dropped everything to run out the door with my dive kit after a tip-off from Colin or others). I finally encountered one on the Landing Craft off Chesil beach last year. Words cannot describe how I felt at the time.”

DS: As a keen diver, have you witnessed any areas along the Jurassic coast that are suffering due to the amount of plastic or waste spills? If so, what can we do to help reduce this?

Jon: “Sadly everywhere. Not so many spills, though that has been in the news recently. But there is more than enough suffering visible underwater. We divers have the rare privilege of seeing it first-hand for ourselves, but how do you persuade people that have never seen that environment for themselves? Why should they care? For many, the sea is still a dumping ground or a muddy mess where nothing interesting could surely live, least of all depend on that environment to survive.

We need to move beyond the obsession with turtles and straws to understand the full scale of the mountain we have, as a species, to climb. Single-use plastics make up a tiny proportion of the litter in the marine environment. Whilst we must not demonise our fishermen for earning a living, we must recognise the issue of lost or ‘ghost’ gear in the marine environment. A lost lobster pot, un-retrieved, is a death trap that will lure in more and more creatures that will not be able to escape; and serve only to bait the trap, attracting more victims. Just last year, I cut out a five-foot conger eel from a ghost pot on the SS Baygitano in Lyme Bay. It wasn’t the first, and I doubt it will be the last – but what can you do?

Fortunately, there are some things you can do if you’re willing to help.

First and foremost, educate yourself about marine plastic and the environment. Wash the materials you recycle at home more thoroughly to give them a better chance of being recycled. Join the Marine Conservation Society or Dorset Wildlife Trust and actively fund the organisations engaging with the public to raise awareness of the main issues. We can likewise support initiatives such as Litter Free Dorset Coast and Sea – or any local beach cleans in your area.

If you are a diver or snorkeller, undertake the Seasearch Observer course and actively contribute to the scientific data used by the government to make future policy. Dr Charlotte Bolton, the National Seasearch Coordinator, is herself a Dorset resident and regional coordinator, Lin Baldock – has likewise been heroic in her efforts to train our diving community and enthuse the public about their local marine environment.

Personally, and directly through my work with British Divers Marine Life Rescue I am always heartened by the sheer number of people who seem keen to do right by the marine environment; we’re all stakeholders here, after all. Despite the mountain I alluded to that needs to be climbed to tackle these diverse problems, I remain confident that we can make the necessary changes. We’re just up against the clock to an extent we’ve never been before.”