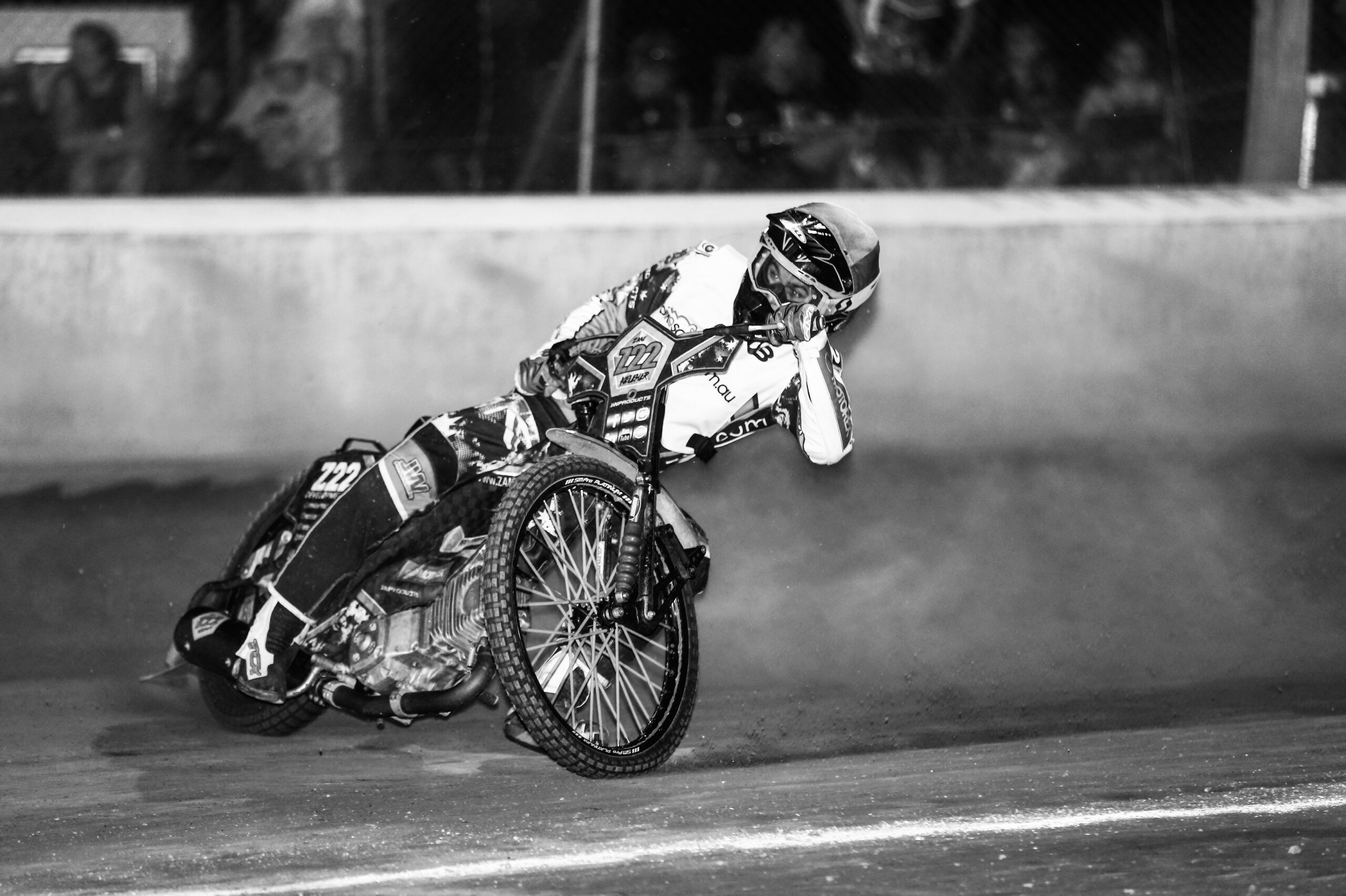 From humble beginnings in Rockhampton, Australia, 28-year-old Zane Keleher inherited a love for motorcycles. In his mid-teens, Zane competed at a national level across the country at the Australian Motocross Championships. Over five seasons from 2011-2015, he competed at MX Nationals, and in 2015, Zane experienced speedway for the first time – in his hometown of Rockhampton.

Motocross or “MX” is a dirt bike racing sport in which riders compete on off-road courses like gravel, mud, or grassy roads, with steep inclines and hairpin turns.

Speedway bikes have no brakes, just one gear, a clutch and 500cc engines which run on methanol fuel and can accelerate to speeds over 80mph. They race around an oval circuit of around 300 metres in length, accelerating to bring the rear wheel out to initiate a skid to get around the tight corners.

After purchasing two speedway bikes, Zane spent time developing his technique and speed. He won his first regional contest, and in 2016 he became a Motorcycling Australia Coach, and Z22 Developments was born. 2018 was a successful year for Zane, coming 3rd at the Queensland Titles, which gave him his first visa opportunity. He was also one of the eight seeded riders for the 2019 Australian Championships, and he became Handlebar Heroes Champion. In 2020, Zane made his international debut with world-renowned Poole Pirates, and after a short spell at the club, he signed to the Plymouth Gladiators.

DS: Hi Zane! Firstly, congratulations on your successful career in motocross and speedway. Tell us how it all began for you and where you found your love of motorcycles?

Zane: “My dad raced motocross for a few years before he sold his bikes to start his own business. I remember going to motorcycling events as a kid and watching VCR’s on repeat and wanting to ride a motorbike.

When I was nine years old, I started motocross. I also did various other sports as a kid, so I did not take motocross too seriously until my mid-teenage years when I decided to be a professional motorcycle rider.”

DS: What made you decide to transition from motocross to speedway?

Zane: “Speedway had always been a popular event in Rockhampton, and I remember going along quite regularly as a young kid.

Rockhampton hosted the Australian Championships in 1962 and 1963 and the Queensland Championships from the 1960s to the early 2000s. Rockhampton has a rich heritage, with many of the best riders in the world competing at the impressive showground track over the years.

Unfortunately, I grew up during the mid-2000s, and there was no longer any speedway bike action as the cars had somewhat taken over. Then in 2015, a private promoter (also a family friend) brought speedway back to Rockhampton in a big way. Jason Crump headlined the first HANDLEBAR HEROES event, and made it his first race back since retiring in 2012. I was a starting marshal that night, so I witnessed the action from the infield, and the noise, the vibrations, the smell of the methanol got me excited. So, when my motocross results were plateauing, I knew I wanted to try speedway.

One month later, I had my first ride on a speedway bike at a group coaching session with Crumpy and a group of motocross riders who were keen to give it a go.

I seemed to pick it up okay. I think because I already followed speedway and knew a bit about how it should look. The following month I bought a bike, and three months later, I had my first race, the 2015 Queensland Championship, at Rockhampton for the first time since the early 2000s.

I could see the potential to become a professional speedway rider, and the pathway seemed a lot clearer, so deciding to switch full time was a good choice.”

DS: When the exciting offer came from Poole Pirates to relocate to Dorset, how did you feel about leaving Australia for the UK?

Zane: “I was ready to come to the UK. I had worked hard to get up to the level required to make it into professional racing, so it was just a matter of waiting for a contract offer to come through. It is hard leaving your family, friends, and home behind, but that is the sacrifice you make to pursue this career. Australia is a beautiful place, and that is my home, but I cannot race professionally there, so I had to make the big step to come to the UK.”

DS: I see it is going well at Plymouth Gladiators; what can we expect to see from you in the coming years?

Zane: “I’m feeling settled at Plymouth. It is a great club with great people involved. I aim to keep progressing in my speedway career. There are lots to look forward to in the coming years with more racing across Europe, the UK and Australia.”